CHENNAI: Lack of sufficient exercise will put one in four people across the world at risk of diseases such as cardiovascular disease, type 2 diabetes, dementia, and some cancers, says a damning peer reviewed observation study to estimate global physical activity trends over time.

The study, undertaken by researchers from the World Health Organisation and published in The Lancet Global Health journal, says there has been no improvement in physical activity across the globe since 2001. If current trends continue, the 2025 global activity target of a 10% relative reduction in insufficient physical activity will not be met, it said.

“Unlike other major global health risks, levels of insufficient physical activity are not falling worldwide, on average, and over a quarter of all adults are not reaching the recommended levels of physical activity for good health,” warns the study’s lead author, Dr Regina Guthold of the WHO, Switzerland. 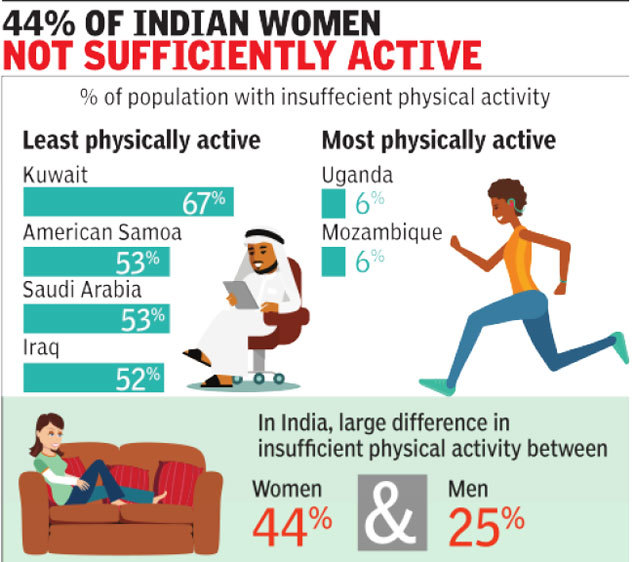 In 2016, based on self-reported activity levels of in adults from 358 population-based surveys in 168 countries (1.9 million people) while at home, transport and leisure showed that around 32% women and 23% men worldwide were not doing recommended levels of physical activity to stay healthy — 150 min of moderate exercise or 75 min of vigorous intensity per week.

What hurt doctors most in India was that more women were inactive compared to men. At least 44% of women reported insufficient activity compared to 25% men. “Most women are diagnosed late, are under treated and have larger complications because they tend to neglect health and drop out from treatment more than men,” said Chennai-based diabetologist Dr Anjana Mohan, who was a part of the study.