KOCHI: The highest number of cancer cases in India is detected from Kerala, followed by Mizoram, Haryana, Delhi and Karnataka, while it is the lowest in Bihar. In 2016, cancer incidence rate in India was 106.6 per 1 lakh
people, while in Kerala it is 135.3 per 1 lakh people. Even mortality and disability rates due to cancer are high in the southern state, a new study shows.

The death rate for both sexes due to cancer was highest in Mizoram, followed by Kerala and Haryana. With the southern state witnessing 73.5 deaths per 1 lakh females and 103.4 per 1 lakh males, disability due to cancer was highest in Mizoram, Kerala, Assam and Haryana, says the report on ‘The burden of cancers and their variations across the states of India: Global burden of disease study 1990-2016,’ published in the Lancet this month. 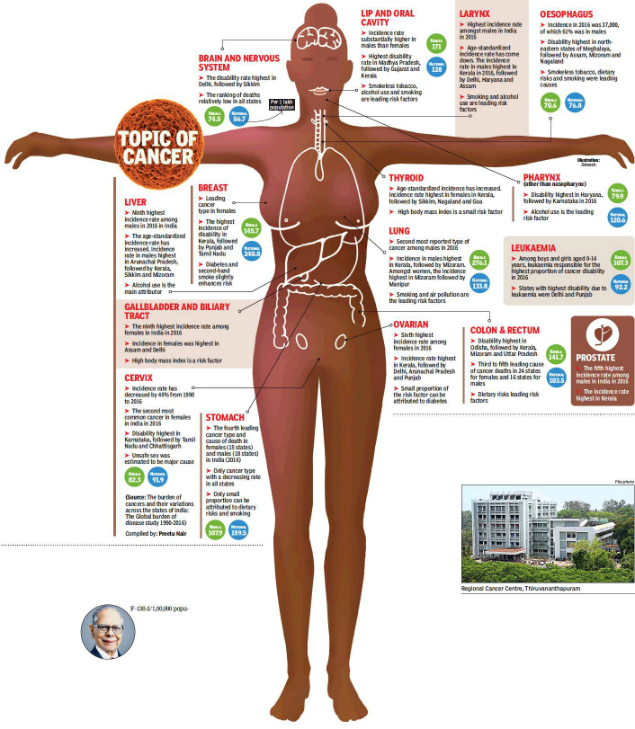 Dr A Nandakumar, director, National Centre for Disease Informatics and Research, Indian Council of Medical Research (ICMR), said Kerala has a slightly older population compared to the rest of the country and this could be reason for high incidence. “If you take the proportion of people above the age of 65 in Kerala, which is the age during which people are more prone to get cancer, it is high compared to the rest of India. Also, Kerala has well-established cancer care centres and cancer registry,” said Nandakumar, co-author of the study funded by Bill & Melinda Gates Foundation, ICMR and Union ministry of health and family welfare.

Rajeev Sadanandan, secretary, health, said the factor that influences incidence of cancer the most is age. “The percentage of aged persons above 65 is 50% more than national average. Our detection is also high,” he said.
The study analysed variations in cancer burden across India using 42 populationbased cancer registries and the nationwide sample registration system to estimate the incidence of 28 types of cancer in every state from 1999 to 2016. It shows that 8% of the total deaths and 5% of the total disability-adjusted life years (DALYs) in India in 2016 were due to cancer, double the contribution in 1990.

“With improved palliative care, pain that contributes mainly to disability in cancer can be taken care of. Kerala, which has good palliative care facilities need to improve the referral system. Also, there is a need to educate MBBS doctors so that they can detect cancer at an early stage,” added Dr Nandakumar.

Dr Balram Bhargava, director general, ICMR, said that it was time for all states to take adequate measures in cancer prevention and control. The report will help state governments take better policy decisions. “In India, 60% of funding is being done by the Centre and it can be diverted by the states depending on the status of the disease,” he said