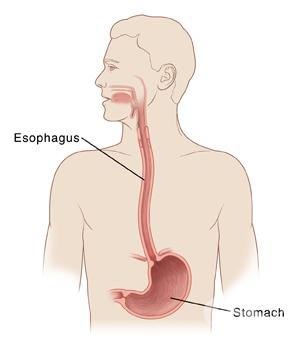 What is esophageal cancer?

Cancer that occurs anywhere in the esophagus or food pipe is called esophageal cancer.

Cancer of the esophagus typically occurs in one of two forms, squamous cell carcinoma arising from the stratified squamous epithelial lining of the organ, and adenocarcinoma affecting columnar glandular cells that replace the squamous epithelium. Other types of esophageal cancer are uncommon.

The esophagus, also known as the food pipe is a muscular tube measuring 20-25 cm long and 2-3 cm wide that serves as a conduit for moving food and drink from the mouth to the stomach.

Burden of the disease

Are you at risk?

How can it be prevented?

If you have any of the following symptoms, it is advisable to consult your doctor:

Screening for esophageal cancer is recommended if you are at a high risk, for example if you have Barrett’s esophagus.

If you are at high risk of esophageal cancer, upper GI endoscopy at regular intervals with biopsy from suspicious areas is recommended.

How can it be diagnosed?

Endoscopic ultrasound (using an ultrasound probe at the end of an endoscope) helps the doctor to see the extent of growth of tumor into nearby areas as well as to check for enlarged lymph nodes.

The stages of esophageal cancer range from 0 to IV.

Stage 0. Cancer is limited to the epithelium or the cells lining the esophagus.

Stage I. The size of the tumor is small (7 cm or less) and is limited to the esophagus.

Stage III. Cancer involves all the layers of esophagus and has spread to nearby lymph nodes (not more than 6 in number).

Stage IV. Cancer has spread to 7 or more lymph nodes OR involved the coverings of lungs (pleura) or heart (pericardium) OR spread to trachea, aorta, spine OR to distant organs like liver and lungs.

The National Comprehensive Cancer Network (NCCN) provides guidelines for the treatment of esophageal cancer [27]. The treatment options depend on the stage of the cancer as well as your overall health.