What is gastric (stomach) cancer?

Cancer that starts anywhere in the stomach is called gastric (stomach) cancer. 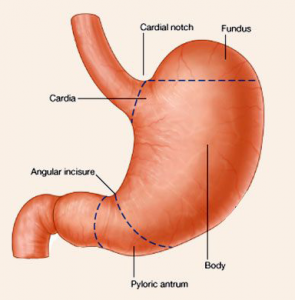 The stomach is located in the upper abdomen and lies just below the lungs. It is a muscular bag and  has three main parts:
(i) Cardia:  Upper portion which connects the stomach with esophagus or food pipe.
(ii) Fundus/ Corpus: Middle part or body of the stomach, and
(iii) Antrum and Pylorus:  The lower part of stomach.

Stomach continues to produce juices and proteins (enzymes), even when it is empty. To protect the stomach wall from the acid and the pepsin it also produces thick mucus.

Burden of the disease

Are you at risk?
Exact risk factors for gastric cancer are not known. However, most of the gastric cancers are related to lifestyle factors.

I) Risk factors that you can modify

Eating foods that are high in salt can increase the risk of stomach cancer. Most of the salt you eat is in everyday foods such as pickles, bread, cereals and ready meals.

Risk of stomach cancer also increases if you eat lots of pickled vegetables which usually have high salt content.

A diet high in processed meat such as ham, bacon, salami and sausages has been linked to risk of stomach cancer.

Government of India recommends a limit of 90g of red and processed meat a day and advises to reduce it to 70g or less (cooked weight). This is about the same as about 2 sausages.

Smoking of food may lead to the release of cancer causing chemicals.  Frequent intake of smoked foods has been associated with increased risk of cancers in the gastro-intestinal tract.

Long-term inflammation of the stomach, anemia due to vitamin B12 deficiency, stomach polyps, obesity etc may increase the risk of stomach cancer.

Toxins: Eating foods like groundnuts contaminated with a fungus called aflatoxin may increase the risk of stomach cancer.

II. Risk factors that are not modifiable
Age: Stomach cancer is more common in older people, especially those above 75 years.

Gender: Men are nearly twice as likely to get the disease compared to women.

Certain Genetic Conditions
• Family history of stomach cancer. Risk increases if you had/have a mother, father, sister, or brother who has had stomach cancer [30 ].
• Blood group A:Individuals with blood group A have increased risk for stomach cancer [ 31 ]
• Certain inherited syndromes such as Li – Fraumeni syndrome and Familial adenomatous polyposis (FAP) are associated with familial stoamch cancers.[ 32,33]

How can it be prevented?

If you have one or more of the following symptoms, it is advisable to consult your doctor:

Are there screening tests for stomach cancer?

(2) Upper GI endoscopy: It is a technique in which a flexible tube with a camera is used to see the lining of gastrointestinal tract.

How can it be diagnosed?
Tests and procedures used to diagnose stomach cancer include:

• Upper GI endoscopy (Esophagogastroduodenoscopy or EGD): A thin, flexible lighted tube containing a micro camera at the end is passed down through the mouth into your stomach to look for signs of cancer. This lets the doctor examine the lining of your stomach. If any suspicious area is found, a small piece of tissue is taken from that site (biopsy) for laboratory examination.

• Endoscopic ultrasound (EUS): A small transducer is placed on the tip of an endoscope. Sedation is given to the patient and the endoscope is passed down the throat and into the stomach. This allows the doctor to look at the layers of the stomach wall. If cancer is there, the doctor can check the nearby lymph nodes and other structures just outside the stomach to determine the extent of cancer spread. EUS can also be used to help in guiding a needle into a suspicious area to get a tissue sample (EUS-guided needle biopsy).

• Biopsy: A small tissue piece is taken from a suspicious-looking area found during endoscopy. Biopsy may also be taken from nearby lymph nodes or suspicious-appearing areas in other parts of the body to confirm spread of the stomach cancer.

Treatment of stomach cancer depends upon the growth and spread of the cancer. Treatment options include: