Tobacco Use in India
Tobacco use in the Indian subcontinent is centuries old, the two main forms of use are chewing and smoking [1].

India is the second largest consumer and third largest producer of tobacco in the world [2].
The prevalence of overall tobacco use among males is 48% and among females is 20% [3].

Data show that, in India more than 35% of adults (274.5 million) use tobacco, of this 163.7 million use only smokeless tobacco; 68.9 million are only smokers while 42.3 million users of both smoking and smokeless tobacco. Over 30 percent of Indian population above the age 15 uses some form of tobacco which includes 14.6% of children in the age group of 13-15 years. Smoked tobacco use is more in men compared to women who are more likely to use smokeless (chewed) tobacco. Beedis are smoked more than cigarettes [4,5].

More than 4,000 different types of chemicals have been found in tobacco and tobacco smoke. Over 60 of these chemicals have been classified as carcinogens (cancer causing agents) by International Agency on Research in Cancer (IARC) [6]. The main chemical found in tobacco is nicotine which is a highly addictive chemical. Its usage over a long period makes a person physically and psychologically dependent on it [7]. 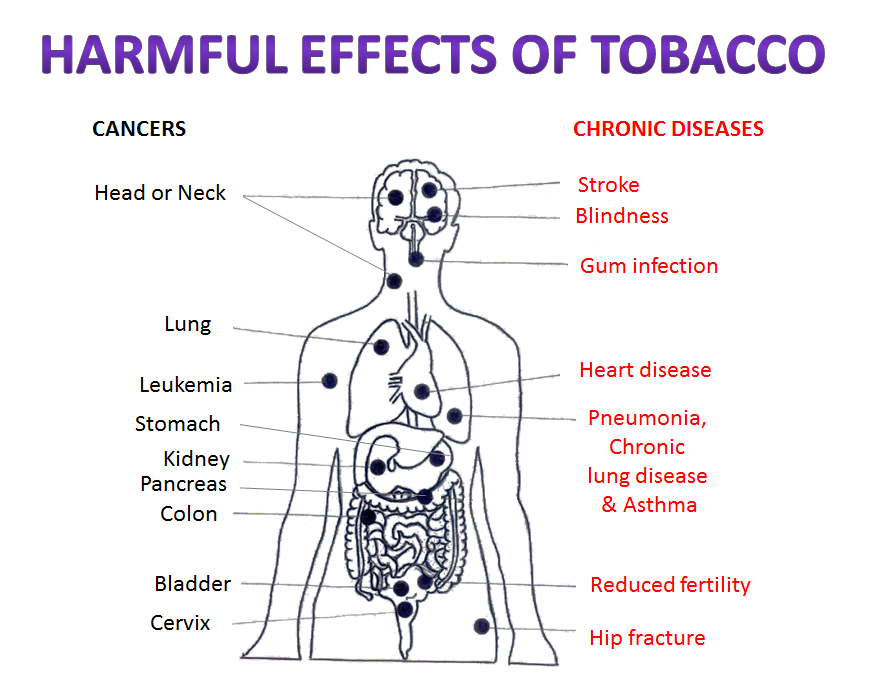 Tobacco use affects almost every major organ and system in the body causing a great deal of morbidity and untimely death. Tobacco use in any form can cause cancers in different organs/sites in the body including the mouth, throat, larynx (voice box), brain, esophagus, lungs, gall bladder, kidney and breast. Tobacco also causes many other disorders such as heart disease, chronic obstructive pulmonary disease, stroke, blindness, tooth and gum diseases etc [6,7].

Nearly 45% of all cancers among males and 17% among females in India  and more than 80% of oral cancers are directly attributable to tobacco use [8].

The latest Tobacco Atlas, shows that India ranks third in the top 20 female smoking populations across the globe. Female smokers in India die an average eight years earlier than non-smoking women of the same age [9].

Tobacco Use in Young Indian Population

Despite efforts by both Government of India (GOI) and World Health Organization (WHO) in controlling the tobacco menace, prevalence of tobacco use in India is reaching alarming proportions among children and adolescents.
A survey done by the National Sample Survey Organization of the Indian Government puts children of ages 10-14 addicted to tobacco at 20 million and about 5,500 new users (approximately 2 million new users every year) are added every day to this astounding figure [10].

Tobacco use is a major preventable cause of premature death and disease worldwide. The Global Tobacco Surveillance System (GTSS) data reveals that currently, approximately 5.4 million people die each year due to tobacco-related illnesses and this is expected to increase to more than 8 million a year by 2030 if the tobacco use trend continues in the same way. Of this approximately 80% of deaths occur in developing countries [11].

Tobacco use is one of the major reasons for death in India. There were 1.2 lakhs tobacco related cancer deaths in India in the year 2010 [12].